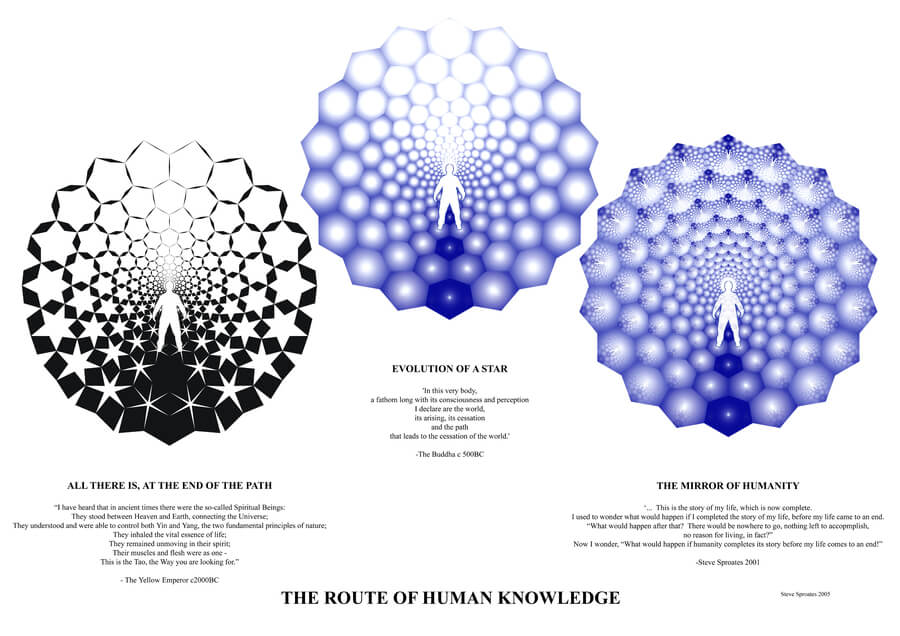 ‘Gems of Wisdom’
from ‘The Abstract Core of Humanity Series’

My perception of the current situation is as common, and also as unique, as anyone else’s, however in relation to the completion of ‘the story of my life’, the current situation is a worldwide mirror image of my burnout situation. The burnout, which stopped my world and turned it upside down was my opportunity to begin and subsequently complete my life story. Thus also for humanity, as a whole or a part, there is likewise a chance to begin and complete its ‘species story’ in a relatively short span of time, before the greater catastrophe of climate change interrupts the process and maybe before my life comes to an end. Should it succeed in this undertaking, the future will be seen clearly as completely unknown, which opens up brand new potentials. Mystics would tell us that it has always been this way and that most of humanity remains asleep to this fact. Maybe this world crisis, which mirrors my own of around 20 years ago, will provide a worldwide opportunity for humanity to wake up to reality?

So ‘Gems of Wisdom’ is a present reworking of a drawing/concept that has emerged repeatedly in my sketching over the decades but also appearing in the ‘story of my life’ as it tries to show the full extent of duality – its completeness but also its limits. It would take a more extensive discussion to explain what I mean by duality and the application of the concept to the world of structure and form therefore to enable the full spectrum of implied and embodied ideas in the image to be known some sort of guidance as to how to see it, would be necessary. However depending on the mind of the viewer, a contemplation of the image and its symmetries, over time, will reveal more than its formal characteristics. The image also works like the ‘Magic Eye’ patterns so if you are familiar with those, you may like to try seeing it in that way, as it is quite fascinating. The quote by Sri Nisargadatta articulates my artistic exploration which is embedded in the spiritual, which is ultimately embedded in awareness, thus contextualising the image.

The Abstract Core of Humanity’ is also from the time of ‘the story of my life’, which pulled together many themes, including those running through my artistic output. It represents a mystical view of the evolution of human consciousness. The images reflect the quotes below them and vice versa. I hope in this case, the image does speak for itself. I was struck by the synchronicity of this pandemic recreating on a global scale that which I experienced when I burnt out. I went from burning out to a subsequent awakening out of my preconceived identity by completing my life story, then “Wondering what would happen if humanity completes its ‘story’ before my life comes to an end.